In the 2020 race, the 2nd District leaned Conservative, but redistricting earlier this year changed Garbarino’s district to cover even more of Suffolk County. Now, it spans into Republican strongholds on Long Island’s south shore.

Garbarino said he was confident in the GOP taking the majority in the U.S. House.

“With the announcement that we just won two seats in Nassau County, I think that we are going to have a full red Republican delegation from Long Island,” he said during his acceptance speech last night.

Republicans hoped to retake control of the House, but neither party had reached the 218 members needed for a majority. But the GOP sweep of Long Island could help their chances.

Redistricting eliminated the majority red Suffolk County from the previously blue 3rd District. Also, Nassau County’s red wave in 2020 could have shaped the outcome of the 4th District’s midterm election.

Garbarino believed the GOP could get bipartisan support on climate resiliency, cybersecurity and veteran benefits that are needed in his district — regardless of the makeup of Congress.

“It’s not about being the loudest, it's about being the most effective. And you have positive conversations with people and you get things done. That’s how I’ve done it the last two years in Congress and I’m going to continue with what works,” Garbarino said. 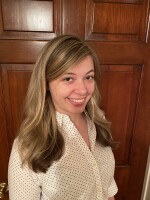