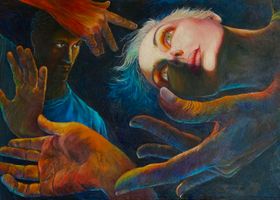 This solo exhibition in the upstairs space of the library will show works that explore light as a metaphor, with subjects that dance in and out of darkness representing the confusion of life: when hidden meaning, interpretation and betrayals belie an appearance of balance. Paintings include oil on canvas as well as digital prints from her illustrated children's book, Moonglow. She has chosen this time of post-pandemic awakening ("a reconnecting") to show, for the first time, restored sculptures: "Broken Hands", that were destroyed in the LA earthquake. Some furniture sculpture will also be on display. Cynthia Wells studied at California Institute of the Arts and is an internationally exhibited artist and animation filmmaker. She was nominated for her film, “Interview with Talullah, Queen of the Universe”, for two Annie Awards: Outstanding Achievement in Animation and Achievement in a Short Film. Her second film, “The Shadow of Doubt” won six awards and played in 26 film festivals. Wells worked as supervising animator on “Once Upon A Forest” (20th Century Fox), and “The Thief and the Cobbler” (Miramax). She has credits in over ninety films and commercials. Her paintings have been exhibited in San Francisco, Ottawa and Los Angeles. Print illustration credits include Pepperdine University, LA Weekly and the Malibu Times. The exhibition is on display daily through May, June and July.