Ceremonial Dress from Southwest China: The Ann B. Goodman Collection 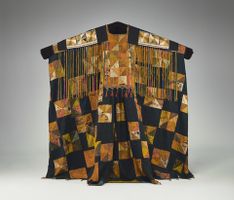 Drawn from a recent gift to the Yale University Art Gallery, this exhibition showcases the technical knowledge, artistic skill, and visual imagination on display in the ceremonial clothing of those living in Guizhou, Sichuan, Hunan, Yunnan, and other provinces of southwestern China. While the Han people make up more than 90 percent of the inhabitants of China, the individuals who created the textiles on display identify as some of the 55 other groups, which are distinguished by lifestyle and language. Worn during life-cycle ceremonies such as births, marriages, harvest celebrations, and deaths, as well as at other significant events, the clothing on view—including jackets, skirts, baby carriers, hats, and shoes—is made by the women of each community. They gather the cotton and indigo, dye the cloth, sew the garments, and embellish them with batik, embroidery, appliqué, and other techniques, blending traditional motifs with personal taste to create unique works of art. In addition to over 15 ensembles, the exhibition features silver headdress ornaments, necklaces, and bracelets produced by men in the same communities and worn as symbols of skill and wealth.