'Rosa Parks House Project' Will Be Offered At Auction

The Public's Radio | By Talia Blake

The house from Detroit, which was once home to the brother of civil rights icon Rosa Parks and his family, and where Rosa Parks stayed with family after she left the south will be offered at auction this summer in New York after being saved from demolition and turned into an art piece.

Guernsey's auctioneers said it will offer the house where Parks' family lived in a midsummer auction in New York City that will also feature several other items related to African-American history and culture. It said it expects the tiny wood-framed house marked with peeling paint to fetch seven figures.

The house was bought by Rosa's neice Rhea McCauley in Detroit. She donated it to artist Ryan Mendoza, who shipped it to Berlin turning it into an art installation.

Earlier this year, Brown University had agreed to display the structure in Providence as part of an exhibit, but backed out of those plans citing a dispute over the structure. The exhibit was temporarily displayed by the nonprofit WaterFire Arts Center in Providence, after the organization raised enough funds to showcase the house for a month. But, the house had still been searching for a permanent home.

Mendoza and Guernsey's told the Associated Press that the proceeds from the sale will go in part to a foundation set up by McCauley to help preserve her aunt's legacy.

As part of the same auction, Guernsey's also will sell items including two pages of notes handwritten by Parks describing her first encounter with Martin Luther King Jr., in which she writes that "I knew I would never forget him.” 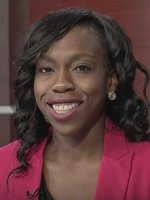 Talia Blake
Talia joined RIPR in February 2018 as the Morning Edition Producer. She graduated from the University of Central Florida in 2017 and interned with public radio station WMFE in Orlando.
See stories by Talia Blake