On a cold afternoon in early December, protesters gathered outside of Beinecke Plaza on Yale’s campus. Their call-and-response chants echoed across the quad. “What do we want?” shouted a protest organizer through the loudspeaker. “A just recovery!” responded the crowd.

Despite the 30 degree weather, over 100 people attended the rally. At the top of the plaza steps, handmade towers assembled with paper and covered in 660 photos of Yale students were on display. The towers stood about seven feet high and lit up from the inside so that even at night the photos glowed and could be seen from far away.

Students Unite Now, or SUN, created these towers to give to the administration. They want Yale to provide more financial support to students on aid and access to better mental health care resources. They said that these demands primarily affect students of color and working-class students.

Alexandra Contreras-Montesano is an organizer with SUN. She explained that the towers are a donation to Yale’s capital campaign. She said that they want the University to acknowledge how many students are affected by these issues and stand in support of SUN’s demands.

“Doing this not only immortalizes it in terms of students’ memories but also in terms of it [being] unavoidable for administration. They have to see this donation, and I think that that cements it in institutional memory, as well,” Contreras-Montesano said.

Over several weeks, SUN canvassed the Yale student body to spread awareness about the financial and mental health issues. Through these conversations, they collected over 650 photos and testimonies of Yale students who stand with the demands.

SUN’s activism goes beyond students’ concerns. They also work with local New Haven unions and the community organization New Haven Rising. Union organizers and SUN are calling on Yale to pay its fair share of taxes, honor its hiring commitment to the city and support residents during the pandemic. They also demand that Yale respect its library workers. Many of the library workers’ jobs are subcontracted by the university to non-union workers.

Manuel Camacho spoke at the recent protest. He is a leader in New Haven Rising and the youth president of the anti-gun violence organization Ice the Beef, while being a junior at James Hillhouse high school. In his speech, he explained that there are many steps for New Haven to undergo a just recovery.

In 2015, Yale agreed to hire 1,000 New Haven residents by April 2019. Five hundred of those jobs were prioritized for workers from historically low-income communities where many Black and Brown residents live. Although it failed to meet this requirement before the deadline, it has recently passed this threshold. Yale said that it is committed to helping people from these historically low-income communities find permanent pathways to employment. Yale also announced that it is nearly doubling its annual contribution to the city of New Haven.

Jaime Myers-McPhaill, an organizer with New Haven Rising, said that the unions were able to hold Yale accountable, but that the fight is not over.

“There is more work to be done so that the money that we won is spent in combating racial inequality and changing the maps in our cities,” he said.

Myers-McPhaill also emphasized the importance of student organizing in collective action and illustrates how the fights of SUN and New Haven Rising are intertwined.

“We can’t make a larger systemic change without each other and without recognizing how our fates are tied,” he said. “When we combine our fights and reach across the walls, we’re able to both find power and strength.”

In response to students’ demands for better financial support, Peart pointed to the university’s recent expansion of their financial aid policies. She said these policies reduce the amount that students on financial aid are expected to contribute towards their Yale education.

Students celebrated this action from the university. They said it is a result of years of organizing and taking direct action, but they said they won’t stop fighting until the student contribution is fully eliminated. Aly Moosa, who attended the protest and is an organizer with SUN, described how SUN’s campaign to canvas the student body and assemble student photos into visible towers creates a powerful message.

“Every photo has a story, and although we may not be able to hear everyone’s story, every picture every face everyone that holds up that SUN sign, it’s a message that despite we may have different experiences and come from different backgrounds, we all have the same demands. We have all the same grievances towards this institution,” Moosa said.

While being a full-time student, Ali said he has been working two jobs to cover the costs that Yale expects him to pay. He wants to make Yale a better place not just for the current students, but for the future generations of students as well. 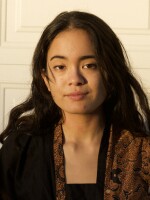