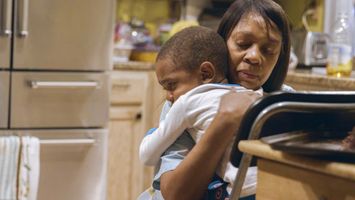 Tickets at: portjeffdocumentaryseries.com/ticketsvenues DUE TO NEW ONLINE SCREENING LICENSING REGULATIONS, WE MAY ONLY SELL TICKETS FOR THIS FILM TO RESIDENTS OF NEW YORK STATE. WE WILL HAVE TO REFUND THE TICKET PURCHASE TO ANYONE WHO BUYS A TICKET AND DOES NOT HAVE A NEW YORK STATE ADDRESS.

Directed by Loira Limbal In New Rochelle, New York, a 24-hour daycare is a lifesaver for parents who work multiple jobs and odd hours to make ends meet. This very touching film follows a mother who works the overnight shift at a hospital; another holding down three jobs to support her family; and a woman who, for two decades, has cared for children of parents with nowhere else to turn. Over the span of two years, across working holidays, seven day work weeks, and around-the-clock shifts, the film reveals the personal cost of rising wealth inequality in America and the close bonds forged between parents, children, and caregivers. THROUGH THE NIGHT “is one of the WOW films at this year’s Tribeca Film Fest. It is a vital and important film about the state of the world” - Unseen Films.
Running Time: 72 Minutes
Guest Speakers via Pre-Recorded Zoom with director Loira Limbal and subjects in the film Nunu and Patrick moderated by Tom Needham, host of Tom Needham’s The Sounds of Film on WUSB radio.
The Port Jefferson Documentary Series is presented under the auspices of the Greater Port Jeff-Northern Brookhaven Arts Council and graciously sponsored by the Suffolk County Film Commission.