How a farm in Arizona is helping people overcome grief

A grief counselor in Arizona who has a heart for abused animals started a sanctuary for grieving people. She calls it a Carefarm. Ryan Heinsius of KNAU paid the farm a visit. And just a warning - the story discusses alleged domestic violence against children that some listeners might find disturbing.

RYAN HEINSIUS, BYLINE: About a half an hour's drive from Sedona's famous Red Rocks, the Selah Carefarm offers refuge for those who've experienced the unimaginable. The 12-acre property is situated on a meandering creek.

HEINSIUS: Next to an artesian spring, hundreds of small, metal medallions hanging from a tree-like steel structure and sway in the gentle breeze. Each bears the name of someone who's died.

JOANNE CACCIATORE: This one is to Harley Quinn, with her birth date, and to Jordan with love from his dad and to Jade Evelynn from her loving parents - lots of children.

HEINSIUS: Joanne Cacciatore knows each medallion represents a world-shattering loss, events that have thrown open chasms of heartache. A research professor at Arizona State and the founder of this farm, she's dedicated a quarter century to helping others cope with trauma.

HEINSIUS: For those who've endured anguish, Cacciatore's Carefarm offers a peaceful refuge from the outside world. Yoga, meditation, art therapy and even kayaking are part of the program. And then there are the animals.

CACCIATORE: OK, let's see if I can call the goats. Hey, goats.

HEINSIUS: Within seconds, a herd of about a dozen of the eager creatures stampede in from a nearby pasture, hungry for attention.

HEINSIUS: The goats are among 50 animals that live at the farm. Nearly all have been rescued, many from violent and abusive situations.

CACCIATORE: They're not encumbered by the need to use language to make people feel better or feel differently.

HEINSIUS: Nearby, a bearded man in his 30s repairs a water fountain. This is Erik Denton. And emblazoned on his gray sweatshirt is a family photograph with the names Sierra, Joanna and Terry. These are his kids who were murdered last year, allegedly by their mother.

ERIK DENTON: I think they put me on about 10 different medications. All it was doing was just numbing me. I couldn't even express how I was feeling. I was just stuck in my head.

HEINSIUS: In a haze of grief, Denton eventually made his way to the farm.

DENTON: It's kind of a - it's its own little world, its own little oasis here. And it's just peaceful down by the water at the sanctuary here with the animals.

HEINSIUS: Each time Denton came here, he found it harder to return to the real world. So in October, he moved to the area and now works at the farm, doing maintenance and caring for the animals.

DENTON: So the animals - you know, they don't accidentally say things. They don't say good morning to you when you walk through the gate because not every morning is a good morning. I mean, how could mornings be good after you lose someone?

HEINSIUS: Denton says in addition to the animals, the compassion and human connections he's found at the farm have been crucial.

DENTON: This is the only place where I can kind of relax and focus and not feel just uneasy. I'm just uneasy wherever I would go other than this place.

HEINSIUS: Denton's grief is something Cacciatore can identify with. She lost a child nearly three decades ago, and the tragedy set her on the path to becoming a grief counselor and eventually founding the farm in 2016.

CACCIATORE: They come out, and they come walk with the animals. And the animals just bring a certain lightness to their bodies, right? They get a little space, and then they can start to process some of the intensity of what they just experienced, which is really powerful.

HEINSIUS: For them, Cacciatore has taken on the role of something like a grief guru, advocating for facing it head-on and being there for those confronting the darkest moments of their lives.

CACCIATORE: If we ever want to have peace in our homes, in our bodies and amongst nations, we have got to start talking about grief - have to.

HEINSIUS: And for her, that process starts with the anguished people who make the pilgrimage here to remember, memorialize and work through their heartache in their own time. For NPR News, I'm Ryan Heinsius in Flagstaff, Ariz. Transcript provided by NPR, Copyright NPR. 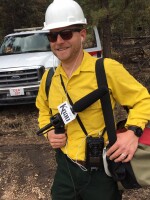